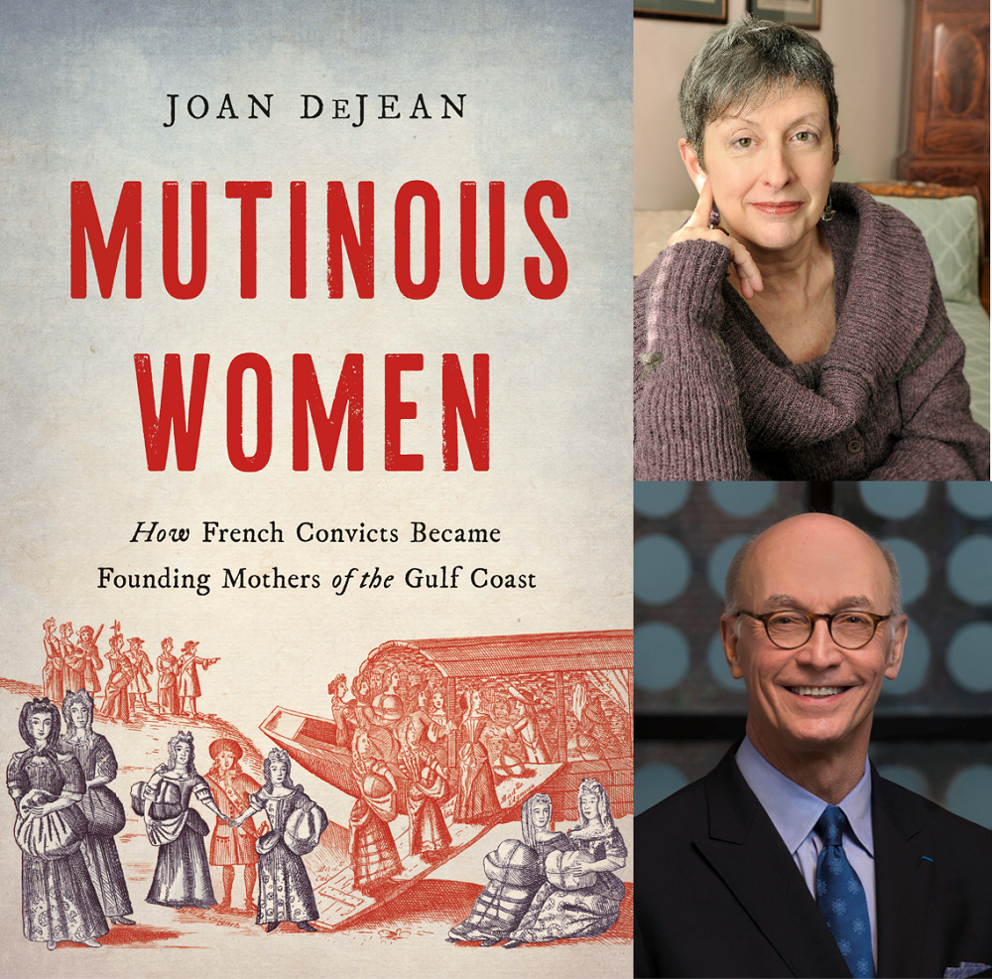 Join Joan DeJean and Jack McCord for a conversation about Mutinous Women, a new book that tells the story of the first large group of Frenchwomen transported to this country, where they arrived in 1720 as convicts deported from their homeland after having been falsely accused of prostitution.  Joan and Jack will discuss who the women really were, their role in the founding of cities such as New Orleans, and their legacy today – above all, their descendants, who now live in states from California and Colorado, to New Jersey and New York.

Joan DeJean has been Trustee Professor at the University of Pennsylvania since 1988. She previously taught at Yale and at Princeton. She is the author of twelve books on French literature, history, and material culture of the seventeenth and eighteenth centuries, including “The Invention of Paris: Making the City Modern”  (2014);  “The Age of Comfort: When Paris Discovered Casual and the Modern Home Began” (2009); “The Essence of Style: How the French Invented High Fashion, Fine Food, Chic Cafés, Style, Sophistication, and Glamour” (2005).

She grew up in southwest Louisiana, in a family and a town in which Louisiana’s French past was the stuff of daily life.  For over thirty years, she has divided her time between Philadelphia and Paris, where she has always worked in the very archives in which, in 2016, she happened upon the story of the women banished/deported to Louisiana in 1719.

An Illinois native, born some 50 miles from the early settlement of Sainte-Genevieve, Jack McCord served as Executive Director of the Alliance Française de Chicago for 16 years, through 2019. A recalcitrant student of French in high school,  he completed two study stints in France (the University of Strasbourg and later EM Normandie for a Mastère/MBA) which honed his language skills and grounded him forever in the life and cultures of France. His love of history, particularly that of the early French presence in the Midwest and of Louisiana and the city of New Orleans, led him naturally South toward his spiritual home, where, with family in Orleans Parish he has ventured several times a year for the last forty.


Mutinous Women is available at basicbooks.com.

This event will be on Zoom and is in English and free for all Alliance Française members, AATF members, and invited guests of the presenter or publicist. Non-members or persons who have no AF chapter nearby can purchase tickets ($10). Click here to register.